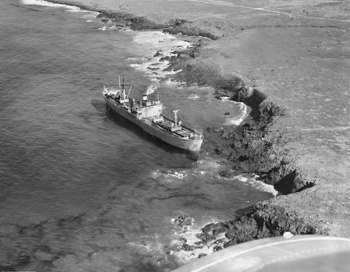 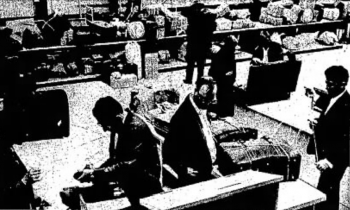 Rescued seamen pass customs. Airlifted off the stricken Greek freighter White Eagle, crewmen pass through the painstaking U.S. Customs inspection at Long Beach Municipal Airport. Plane carrying crew and nearly a ton of baggage made three trips before 22 of the 26 crew members were brought to safety. Capt. M. D. Boulas and three others remained aboard the 7,300-ton vessel pending decision on whether she would be salvaged or, more likely, scrapped. 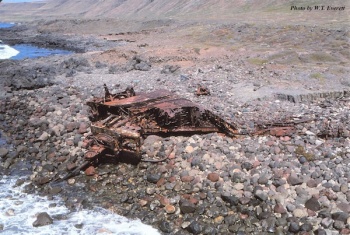 November 10, 1966 [OT]: “Freighter 'Lands' On San Clemente. San Diego — The Greek freighter White Eagle with a crew of 26 went aground on San Clemente Island off the Southern California coast last night, the Coast Guard reported. The 441-foot motorship was bound for San Diego from the Orient. The Coast Guard said the captain of the vessel reported it has a crack in the bow and that the owners will have to decide whether it can be moved before this is repaired. Agents for the ship are Williams, Diamond and Co. of Los Angeles.”

November 12, 1966 [Scottsdale Progress]: “Survey Grounded Vessel. San Diego, Calif. — Marine surveyors Friday studied damage to the Greek freighter White Eagle to determine whether it can be saved from rocks on San Clemente Island, where it ran aground. John Turner of Pacific Tow and Salvage Co. of Long Beach, Calif., said the 441-foot freighter may be too damaged to survive. "Right now the seas are very calm, but if the surf comes up, it won't go good," Turner said. The 7,300-ton vessel was en route here from Yokohama, Japan, to collect scrap iron when it ran aground Wednesday night in a rock-infested cove about 60 miles to the northwest. The stricken ship's 26-men crew remained aboard. A spokesman for General Steamship Co., local agent for the disabled freighter, said the vessel suffered extensive starboard damage, a crack in the port bow and its two holds and double bottoms were filled with water.”

November 15, 1966 [Long Beach Independent]: “Athens Flight Set. Yulelift for Stranded Crew. Twenty-two crewmen of the grounded Greek freighter White Eagle were flown from the stricken vessel to Long Beach late Monday, just in time for a welcome surprise: They'll be home for Christmas. En route from Yokohama to San Diego, the vessel went aground on a reef on the west side of San Clemente Island last Wednesday, and remained hopelessly stuck there despite efforts to salvage her. In three shifts, late Monday, a chartered, two-engined plane airlifted the crew—all but Capt. M. D. Boulas, of course, and three other officers who stayed behind — to Long Beach Municipal Airport. T. D. Stefanidis, port captain at the steamship company's New York headquarters, said the crew would spend the night at a San Pedro hotel and then embark for Athens some time today — by plane, he said. For some men, it has been nearly a year since they visited Greece, and there appeared little chance they would have returned home for Christmas barring the accident. It was the United White Steamship Company's first casualty in a decade, said Stefanidis, who was dispatched here last week when the big Liberty ship went onto the rocks. As of Monday, it had not yet been decided whether there would be further attempts to salvage the 7,300-ton freighter, or whether she would be declared scrap. Ironically, it was a load of junk metal that the White Eagle had been bound for in San Diego — the port she narrowly missed after mistaking one shoreline signal marker for another after hitting the rocks. Stefanidis said Capt. Boulas and the remaining crewmen would stay on board until sometime today, pending a final decision on the ship's fate. It took almost all afternoon Monday for the crewmen to pack their year-long accumulation of clothing and gifts, much of it from Japan, for the painstaking U.S. Customs inspection. In addition to their personal belongings, some brought special souvenirs — bits and pieces of the battered ship they probably will never see again.”

November 16, 1966 [Long Beach Independent]: “Last Crewmen Leave Stricken Greek Ship. The captain and remaining crewmen of the stricken Greek freighter White Eagle abandoned ship Tuesday, indicating the 441-foot vessel is fated to end her days on the rocky western coast of San Clemente Island. And that fate, according to a Navy spokesman, may include serving as a practice target for aerial and ship's gunners to improve the shooting eyes of the U.S. fleet, which uses the island as a gunnery range. Capt. M.D. Boulas and the last three members of the ship's company were flown to Long Beach Airport by chartered plane Tuesday afternoon. They and 23 crewmen flown ashore to leave this afternoon for New York City by air, and all but the master will then transfer to Olympic Airlines for the trans-ocean flight to their homeland. A spokesman for General Steamship Corp. Ltd.'s Wilmington office said there appeared little chance the 7,300 ton freighter can be refloated or otherwise salvaged. Final decision is up to the underwriters, Lloyd's of London, whose Los Angeles agent is Toplis and Harding, Inc., and that decision may be received today.”