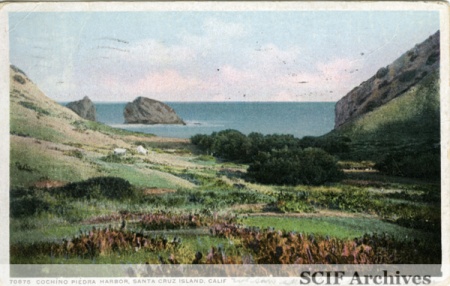 Willows Anchorage, Santa Cruz Island is located on the south side of the island at the mouth of Willows Canyon. It is the first major boat anchorage west of Coches Prietos Anchorage. There are two large unnamed offshore rocks in its harbor which Helen Caire referred to as Buffalo and Ship. In 1906, the Nidever brothers built a large fisherman’s cabin at Willows from lumber salvaged from the wreck of the Colman on San Miguel Island. From 1908 to 1909 Ira Eaton and his family lived at Willows. The island superintendent’s report of April 1, 1918 states: “The Assistant visited Willows Harbor and tore down a shack built there.”

Vessels wrecked at Willows include:

August 10, 1912 [SBMP]: “Justice Jacob Shoup yesterday continued his series of lectures on his recent fishing tour around Santa Cruz Island… He says that while his party was camped in Willow Canyon it was only a five minute task to catch ass the fish needed for a day’s eating…”

July 19, 1914 [SBMP]: “Today the Sea Wolf will take an excursion party on a usual island trip. Generally the destination is one of the harbors on the north side of the island, and there are comparatively very few of the island invaders from Santa Barbara who know anything about the south side of the most beautiful of all the islands along the California shore of the Pacific. Today’s party will start at 7 o’clock from Stearn’s Wharf for a trip clear around the island, stopping at Willow Harbor on the south side, for dinner. The party will number about 25, and Captain Eaton promises the excursionists an enjoyable day.”

August 27, 1914 [SBMP]: “At an early hour this morning, Judge J. G. Shoup, B. F. Ruiz, Charles Hanson, Captain George Nidever and Frank Nidever left for Santa Cruz Island on a camping expedition in Captain Nidever’s powerboat, Marguerite. The party will make its headquarters at Willow Harbor, on the south side of the island, and will make frequent excursion to other attractive points making a stop of about ten days.”

August 27, 1914 [SBDNI]: “Justice J. G. Shoup, Charles Hanson, B. F. Ruiz, Frank Nidever and Captain George Nidever left this morning in the launch Marguerite for a two weeks’ outing on Santa Cruz Island. They go to Willow Harbor, one of the most attractive spots on the island, and far from the usual crowd of visitors who settle in the established camps.”

September 8, 1914 [SBMP]: “Judge J. G. Shoup, B. F. Ruiz, Captain Frank Nidever and Captain George Nidever returned last night from a ten days camping trip at Willow Harbor, on the south shore of Santa Cruz Island. They had expected to do a good deal of running about between the different harbors, but the water was so rough on that side of the island that the sailing was not comfortable, so the party spent all its time at the harbor named. The campers had a fine time, none the less, and caught all the fish they could use and brought home a large number of albacore.”

September 12, 1915 [SBMP]: “Frank Magglio went to Willow Harbor, Santa Cruz Island yesterday with a load of material in his boat, the Sampson, to his camp on Anacapa Island for the same purpose. The fishermen report that the outlook for crawfish is better this season than it was last year. The fish are more plentiful they say. The season does not open until October 15, but the fishermen have a big job to get ready for the operations, as most of them lost all their traps last winter in the gales that swept the island shores, and have to construct a complete set of new traps. The season runs until March 1.”

April 11, 1916 [SBDN]: “Fishermen from the island this morning report a merry camp of Hueneme men at Willow Harbor on the south side of Santa Cruz Island. They are John Wiltfong, Albert Porter, Albert Korts, R. J. Callens, Emil Barsot, Frank Eastman, Cleve Wiltfong, Henry Keir. Barsot caught a 50-pound yellowtail Sunday, while John Wiltfong made the record for the number of fish, hooking 25 barracuda. The men also brought down a wild boar. They have an ideal camp, with pure water close at hand. It is stated that unusual preparations will soon be under way to establish sanitary camps on the island, which promises to be a very popular resort this summer. The increasing number of visitors, it is said, is making the demand for sanitation more than ever urgent, so that this feature will be given attention by the health authorities.”

August 1, 1916 [SBMP]: “This morning Mr. And Mrs. George W. Downing and their son, Mr. And Mrs. John Grocott and child, and Charles Fisk of Los Angeles, a nephew of the Downings, go to Santa Cruz Island for a two-weeks camping at Willow Harbor on the south side of the island.”

August 15, 1916 [Exciting wild hog hunts, boating, swimming and fine fishing made up the program of two weeks’ vacation at Willows Harbor, Santa Cruz Island, from which Lieutenant George Downing of the city fire department and his family, and John Grocott, city plumbing inspector, and his family returned yesterday afternoon. Mr. Downing took two of his famous white bull terriers with him, and they had a wild hog cornered before the camping party had been on the island two hours. The dogs kept up the hog hunting as often as they were allowed to run until their feet became so sore with cactus that the sport had to be stopped. Some extra large hogs were killed. At Santa Cruz Rock they the party made big catches of rockcod, angling to great depths to fish. Lieutenant Downing said today that he never had a more enjoyable vacation in his life, and that Santa Barbara people are certainly overlooking a great vacation ground when they fail to make full use of the island beaches.”

September 4, 1917 [SCICo]: “On September 3rd we gave notice on Ramon Romo et al at Hazard; Rosaline Vasquez et al at Fry’s Harbor; and Frank Nidever at Orizaba. What is the next move? We will serve Willows, Coches Prietos and Blue Banks on September 4th and Middle Banks, Yellowbanks and San Pedro Point on the 5th.”

In 1935 and 1936, “two fishermen, Carlson and his Scottish partner Jimmy, were staying at Willows. They referred to the “wild man” who had lived at Willows before them who “had long hair and beard, wore no clothes, and was half-mad.” They reported he was an Icelander who moved from Sauces to Gull Island before Willows. Unlike other fishermen residents, he had no permit from the Santa Cruz Island Company. The Willows cabin was later used during archaeological investigations.