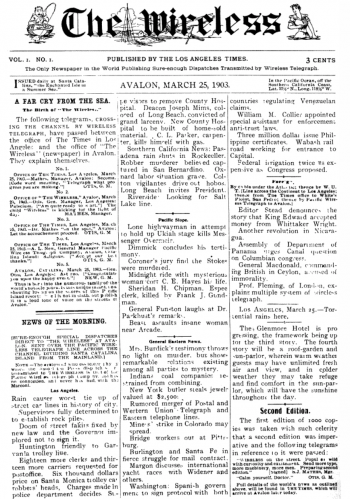 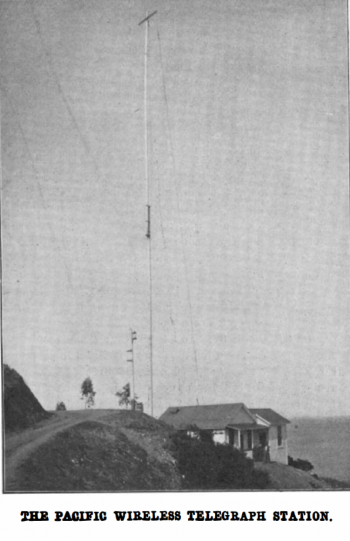 Wireless Newspaper, Avalon, Santa Catalina Island was first published (Volume 1, No. 1) on March 25, 1903 by the Los Angeles Times in an edition of 1000 copies. A second edition had to be printed. Hotel arrivals were announced for the Metropole, Grand View, Bay View, Windsor and Pacific Hotel. Newspaperman, Samuel Jay Mathes (c. 1849-1927) was its editor. Mathes came to Los Angeles in 1875 and first took a job with the Los Angeles Herald for three or four years. In 1881-1882 he directed the editorial policies of the newly established Los Angeles Daily Times. When he moved to Santa Catalina Island, Mathes became a correspondent for the Times, establishing the Wireless in 1903.

If you lived on the small Southern California island of Catalina at the turn of the century, news was hard to come by. The island had a rather unreliable carrier pigeon system and copies of the L.A. Times wouldn't arrive by boat until around 1:30 in the afternoon. News was slow moving. But all that changed on March 25, 1903 when Catalina got the country's first "wireless newspaper" — the latest news sent wirelessly from Los Angeles via Morse Code which was then printed and sold for 3 cents a pop.

Appropriately named The Wireless, this new experiment had amazing implications for the future of mass media. Finally, the people of Avalon (Catalina's only city) could wake up to a newspaper that covered both their small island, along with news from the rest of the world. Newspapers and wireless telegraphy (not yet called radio) were forming an alliance that could help both industries enormously. Moving information from Los Angeles to Avalon no longer required dead trees, a boat, or carrier pigeons. Sadly many of those pigeons died from over-exertion and hunting by sportsmen, according to Scientific American at the time.

The December 1903 edition of Wide World Magazine called The Wireless the "most unique newspaper in the world":

The telegraphic report of The Wireless consists of six hundred to eight hundred words, comprising a digest of the leading news of the day from all parts of the world, as appearing in the California papers of the same date. This news summary gives the readers of The Wireless an inkling of what is going on in the great busy world, and serves as an appetizer for the fuller reports contained in the ordinary daily papers which they receive later in the day."

The Wireless office was destroyed in the Avalon fire of 1915. It is said the newspaper was anti-Santa Catalina Island Company, and therefore the Bannings backed the formation of The Wireless as a more company-friendly venue. Prior to The Wireless in 1903, two short-lived newspaper attempts had come and gone:

The Catalina Islander, founded and owned by Ernest Windle, began with its first issue on January 27, 1914. It is still in publication.

March 26, 1903 [LAT]: “The only daily newspaper in the world publishing sure-enough dispatches transmitted by wireless telegraph had its birth yesterday morning at Avalon, Santa Catalina Island. The event is a unique on e in the history of journalism and marks the beginning of an epoch in the dissemination of news in isolated places. The name of the infant journal is ‘The Wireless,’ appropriately so called on account of the method by which it receives the news of the busy world. The unique sheet begins its career in the shape of a three-column folio, the exact size of the pages being 11 x 8 inches. In this convenient form is crowded, in addition to the local news of Avalon, an epitome of the local and general news appreaing simultaneously in the Los Angeles Times, thus giving the residents of the island and visitors to its lovely shores a comprehensive synopsis of all the principal news of the world, hours before the arrival of the steamer from the mainland with the Los Angeles Morning Times enterprise… The manager of the Wireless at Avalon is S. J. Mathes, for several year past the regular correspondent of The Times at Avalon, and, by the way, one of the founders of The Times. Mr. Mathes also collects and prepares for publication the daily happenings on the island, thus giving the islanders and tourists tarrying there a spicy local paper…”

July 29, 1904 [LAT/SCat]: “Avalon. The Wireless newspaper is again to be resurrected, and will probably appear in the early part of next week.”

August 7, 1904 [LAT/SCat]: “Avalon. ‘The Wireless, the unique newspaper here, has started a prize contest for the most popular lady on the island this season… The prize is a diamond ring…”

August 10, 1978 [LAT]: “Avalon. …According to a booklet published by Pacific Telephone to commemorate the new service, Otto and Oswald Zahn started it all when they totes a basketful of pigeons to the end of the Avalon wharf on July 12, 1894, inaugurating the Catalina Pigeon Messenger Service. That service made possible what was probably the world’s first newspaper ‘suburban’ edition, as the Los Angeles Times started a Catalina newspaper called the Wireless, from the Los Angeles office with stories transmitted by telegraph…”

September 30, 1903 Catherine MacLean Loud notes in her diary: “The Catalina Wireless newspaper has been discontinued. It will be greatly missed.”

March 25, 1937 [TI/Avalon]: “Today marks the thirty-fourth anniversary of the establishment of the first commercial wireless station in the world — that between Santa Catalina Island and White's Point, San Pedro. No less in interest was the printing in Avalon on the same day of the first newspaper obtaining news from all parts of the world by wireless from the mainland. The system of wireless telegraphy used was that of the Pacific Wireless Telegraph Company, having no connection whatever with the Marconi system. In fact, the first Marconi wireless service was not established until one year later, in 1904, from Poldhu and Cape Breton to the Atlantic steamships. Press dispatches were first handled by radio-telegraphy across the Atlantic in 1907. So it is established that the City of Avalon's claim for having the first commercial wireless station, and the first newspaper receiving its news by wireless, is a valid one. The newspaper referred to was 'The Wireless', and was fathered by the Los Angeles Times, with S. J. Mathes in charge of the Avalon plant. A copy of the first edition of 'The Wireless', enclosed in a gilt frame, is the valued property of Pete Lubetich, well-known Avalon resident. He is reported to have at one time refused an offer of $50 for this interesting memento of world progress. 'The Wireless' was likewise the first newspaper ever published in Avalon. The Los Angeles Sunday Times of March 23, 1924, printed a facsimilie of the first page of the first number of 'The Wireless', which Mr. Lubetich will be glad to show any person interested.”

November 11, 2019 [TI/Avalon]: “The newspapers of Catalina Island. CATALINA ISLAND—People who know their Catalina Island history are aware of William Wrigley and his Chicago Cubs using Avalon as a base for spring training. Those same people might also know about the Banning brothers, who owned Catalina Island prior to Wrigley. But did you know the Bannings faced a steady dose of criticism from a local newspaper? That newspaper was the Wireless. Local businessman Willis LeFavor, published the newspaper from 1912-1916; the paper, in addition to being critical of the Bannings, pushed for Avalon to be incorporated as a city. (Incorporation came along in 1913, not too long after Wireless launched.) Wireless, to be sure, was not the first – nor the last – publication covering Catalina Island. The first-ever newspaper on the island was Jewfish, which was introduced to the island public in 1892. Avalon Avalanche would arrive on the scene in 1893. The year 1903 saw the publication of Avalon Crusoe. But Wireless’s criticism of the Bannings lead to the creation of another publication: Catalina Islander. The Islander debuted in 1914 “as a counterforce against criticisms of the banning operations,” according to the book, “Catalina A to Z: Glossary Guide to California’s Island Jewel.” “Issues of the day pitted the townsfolk, who wanted a ‘wet’ city (with alcohol consumption) and no harbor commerce control versus the Bannings, who maintained a ‘dry’ town and trade control over boat traffic,” an entry of the book continued. “The Islander endured even as the Bannings lost on both counts when Avalon was incorporated as a city.” Wireless holds yet another unique place in Catalina’s media history: it was effectively an extension of the Los Angeles Times and a part of Otto and Oswald Zahn’s Catalina Pigeon Messenger Service. “For four years, from 1894 through 1898, Otto and Oswald Zahn operated the Catalina Pigeon Messenger Service, a mail service by pigeons flying between Avalon and Downtown Los Angeles,” according to the L.A. Almanac. “The pigeon service allowed what was, perhaps, the world’s first suburban newspaper edition as the Los Angeles Times provided daily news copy to an island newspaper called Wireless.”