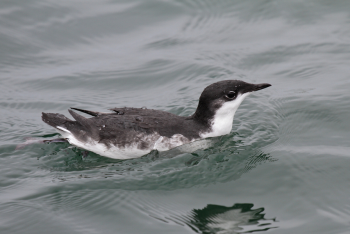 XANTUS’ MURRELETS (Synthliboramphus hypoleucus)[Brachyramphus hypoleucus] nest on six of the eight California Channel Islands. By far, the largest breeding population is found on Santa Barbara Island where they nest during the spring in burrows on the steep hillsides and cliffs. Numbering a few thousand, this is the largest known breeding population of Xantus’s murrelets in the world. When the chicks are 48 hours old, they instinctively leave their nests in the middle of the night and tumble down into the ocean. There they meet their parents and swim out to sea where they will spend the rest of their lives, returning to land only during nesting season. Xantus's murrelets are not known from San Nicolas or Santa Rosa islands. The species is named for Louis John XANTUS DE VESEY, Hungarian-born naturalist who sailed for America in 1851.

The Scripps's murrelet is a small bird. At under 10 inches in length, it is slightly smaller than an American robin. Adults have a 15-inch wingspan and weigh only six ounces. Black above and white on the chin, throat, and belly, Scripps's murrelet is very similar in appearance to Craveri's murrelet, a species that shares a similar range. The two are most easily separated in flight by the distinct white underwing of the Scripp's.

1939: San Miguel Island: “Xantus' Murrelets (Endomychura hypoleuca) were not recorded from San Miguel Island until April 1939 when Sumner (1939) saw one bird on the water .03 km off Prince Island. Breeding was documented in 1968 when an incubating bird was found on Castle Rock, and a chick and six broken eggshells were found on Prince Island. [Marine Mammal and Seabird Survey of the Southern California Bight, Volume 3, Issue 3. University of California Santa Cruz et al., July 1978]”

1897 Santa Barbara Island: “Brachyramphus hypoleucus—Xantus's Murrelet. Common out in the channel between San Pedro and Catalina Island A specimen was secured May 13, near Santa Barbara, and others seen... Entire List of Water-Birds Observed. [March 26-April 4; May 11-June 9]. The party [of the second trip] consisted of Joseph Grinnell, who had immediate charge of the expedition, and gave special attention to the ornithology and entomology of the islands; Horace Gaylord, who collected mammals; and Harry Gaylord and James Brittan [Britton] who devoted their time to archaeology. The party left San Pedro harbor May 11 in a large fishing schooner... [returning June 9, 1897]”
Grinnell, Joseph The Islands of Santa Barbara, San Nicolas and San Clemente, in the Spring of 1897 Pasadena Academy of Sciences Publication No. 1, August, 1897 (26 pages).

1907 Santa Cruz Island: “Brachyramphus hypoleucus. Xantus Murrelet. One taken by Mr. Willett about one mile out from Cochas Pietres [Coches Prietos].” [“At 11:30 p. m., November 19, 1907, my father (H. Linton), Mr. George Willett, and myself left San Pedro harbor in a dilapidated fishing smack and in company with a crawfisherman, one “Cold-foot” Jorgensen. We arrived off the south end of Santa Cruz Island at 10:30 the following day during a stiff norwester. For various reasons we were unable to make camp until the 22nd. It may not be amiss to state here that twice during the blow we were nearly wrecked: once while at anchor in Potatoe Harbor, a broken anchor allowing the boat to drift within the breaker line and nearly onto the rocks. In this instance the timely arrival of Willett and H. Linton in a small boat, saved the day, and incidentally the fishing smack. At another time (the engine having broken down) we were blown nearly onto the rocks of Anacapa Island; but with father at the wheel and Willett and I on the “sheet” we managed to hold her off. I mention the foregoing, and the many sleepless nights spent on the rocky shores, “running” the surf several times each day (with attendant duckings), etc., merely as a warning to those who seem inclined to believe a field naturalists ’ life “strewn with roses”. (Its ’ generally strewn with cacti!)”]
Linton, C. B. Notes from Santa Cruz Island] The Condor 10(3):124-129, May 1908

July 25, 1917 [SBMP]: “Island birds described by U. C. Interesting bulletin tells of beauties of archipelago... When the young Xantus murrelet first tries to swim in the sea at three or four days old, big fish devour a good many, despite the surprising aquatic skills of the fledglings.”