June 18, 2019 [LAT]: “Crash of helicopter on Catalina is fourth fatal accident of this model since April. The crash of a Robinson R44 helicopter on Catalina Island this week was the fourth fatal U.S. accident involving the popular four-seat model since early April, federal aviation records show. Search crews spotted the wreckage of an R44 in rugged terrain on the northwest end of Catalina on Tuesday morning after the pilot’s family reported that he failed to return to Torrance Airport from one of his frequent pleasure flights over the island, Los Angeles Sheriff’s Sgt. Craig Harman said. Paramedics who rappelled to the crash site from a sheriff’s helicopter found the body of the pilot, who was believed to be the sole occupant of the R44, Harman said. The pilot’s identity has not been released pending the notification of relatives, Harman said. The cause of the crash is being investigated by the National Transportation Safety Board and the Federal Aviation Administration, according to FAA spokesman Allen Kenitzer. As is common practice, a Robinson Helicopter representative will participate alongside federal investigators, company President Kurt Robinson said, declining to comment on the circumstances of the crash. “We are devastated by the loss of life in this tragic accident,” he said in an email to The Times. “Our thoughts and sympathies are with the families and friends of the pilot. As always, our first concern and priority is the safety and welfare of the people involved with our aircraft.” The R44, manufactured in Torrance by Robinson Helicopter Co., is the world’s best-selling civilian helicopter, a top choice among flight schools, sightseeing companies, police departments and recreational pilots. It also has been involved in scores of fatal accidents, including several recent ones, according to NTSB records...”

June 18, 2019 [FOX11]: “One person died after a helicopter crashed on Catalina Island, officials said Tuesday. Emergency crews were searching for the missing helicopter around 9:30 a.m. The Los Angeles County Fire Department, U.S. Coast Guard, Los Angeles County Sheriff's Department Special Enforcement Bureau (SEBLASD), and LAFD Air Operations Section all assisted in the search. The Los Angeles County Sheriff Avalon Station said that the helicopter had been missing for 11 hours. Allen Kenitzer of the Federal Aviation Administration said his agency received an unconfirmed report of "a missing Robinson R44 helicopter that was traveling from Torrance to Avalon." Just before 10 a.m. Tuesday, SEBLASD Air Rescue 5 located debris and a smoldering fire at a crash site on the west end of Catalina Island. Ground units were called to respond to the crash site around 10:15 a.m. LAFD said there was one confirmed fatality. "It is believed the aircraft had 1 sole occupant," LACSD said in a tweet. Sheriff's Sgt. Craig Harman of the Avalon Station said the pilot's family had reported that the man would often fly the helicopter over the ocean from Torrance. Harman said authorities believe the man was the lone occupant of the helicopter. The man's name was withheld, pending notification of his relatives. The cause of the crash was under investigation.” 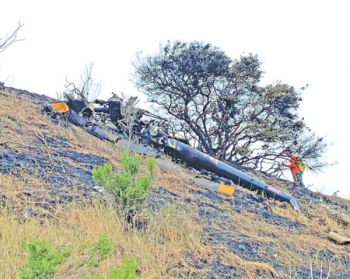 June 21, 2019 [The Log]: “A helicopter crash claimed a man’s life on Catalina Island early this week. The helicopter crashed at a remote location on the island. Paramedics with the Los Angeles Sheriff’s Department emergency service deputies pronounced the pilot deceased around 9:45 a.m., Tuesday, June 18, according to Capt. John Hocking, commander of the Avalon Sheriff’s Station. The cause of the crash is under investigation. The pilot was flying alone. His name had not been released. According to Sgt. Craig Harman, also of the Avalon Station, a man who frequently flew a helicopter from Torrance to fly over the Island didn’t return Monday night, June 17, as expected. His wife called the Los Angeles Sheriff’s Department to report him overdue. The ensuing search involved members of the LASD, the Los Angeles County Fire Department, and the United States Coast Guard. A Coast Guard 55 Dolphin was deployed as part of the search. USCG Petty Officer Mark Barney said the Sheriff’s Department was the first to arrive at the scene. The debris was found around 9:30 a.m., according to Sgt. Harman. Capt. Hocking said Emergency Services deputies landed at the scene in an Air 5 rescue helicopter. The remains were flown off the island to the Los Angeles Coroner’s Office. As of Tuesday, June 18, the pilot’s wife had been notified and authorities were working to reach other family. The joint investigation of the crash is being conducted by the LASD’s Aero Bureau, Homicide Bureau, the LA County Coroner, the Federal Aviation Administration and the National Transportation Safety Board.”

June 26, 2019 [OCRegister]: “ A pilot found dead after the helicopter he was flying crash landed on Catalina Island has been identified as 60-year-old Philip Su Chu Yang of Palos Verdes Estates. Yang, who was identified by authorities on Wednesday, June 26, was piloting a Robinson R44 helicopter from Torrance to Catalina when, for unknown reasons, the aircraft crash landed on a hillside on the west end of the island, authorities said. The aircraft was reported missing about an hour before the discovery of the wreckage about 10 a.m. June 18, said Sgt. Craig Harman of the Los Angeles County Sheriff’s Department. Yang was known to take recreational flights from Torrance to Catalina Island, in which he would fly over before returning to Torrance Municipal Airport, Harman said last week. The Department received a call from the Air Force Coordination Rescue Center after Yang hadn’t returned to Torrance for 16 hours, Harman said. The Federal Aviation Administration and the National Transportation Safety Board were conducting an investigation into the cause of the crash. An accident investigator with Torrance-based Robinson Helicopter Company was assisting in that investigation, the company said. ”