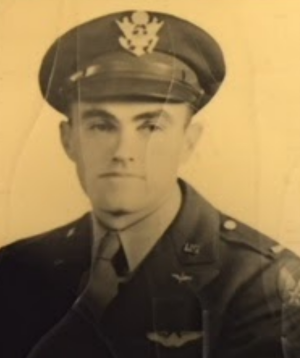 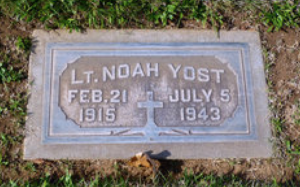 His hometown was Sacramento, CA. With the exception of his parents, some additional family members are buried in Matthew Kilgore Cemetery, Rancho Cordova, Sacramento, CA. He was married and his wife Lorna was living at Salinas CA at the time of his death on San Miguel Island.

Yost was the Bombardier on B-24E #42-7160 that was following B-24E #42-7011 'The Eddie Rickenbacker', Major Thorel 'Skip' Johnson's Crew, on a search and rescue mission for two that had bailed out of this plane over the Pacific Ocean. Their ship had been using fuel at an excessive rate prior to losing two engines over the Pacific off the coast of Santa Barbara. Pilot Johnson ordered the crew into their parachutes and turned the plane around, heading back towards Santa Barbara. Two airmen, Dannhardt and Prosser, not knowing they were still over the Pacific, bailed out prior to the Pilot giving the order and thus were lost at sea. The remaining eight crewmen bailed out safely once the plane had reached land over the mountains. The unmanned plane crashed 10 miles north of Santa Barbara on 04 July 1943. The Command Pilot of B-24E #42-7160, Lieutenant Douglas J Thornburg, was one of four survivors who bailed out of B-24E #42-7119 that crashed three weeks earlier. B-24E #42-7160 descended in heavy developing fog to take a closer look, and crashed head-on into Green Mountain on San Miguel Island, one of the three Channel Islands. A search was then initiated for this plane once it was known that they had lost contact. Eventually the search was called off and it was thought that the plane must have ditched in the Pacific. The following March, a Shepherder named Robert Brooks, one of only two people living on San Miguel Island at the time, found the plane and the remains of the twelve airmen on 800-foot Green Mountain. The plane and crew had crashed at approximately the 500-foot elevation. In 1954, additional crew remains were reported, and the Coast Guard Cutter 'Morris' was dispatched, however, it collided with the yacht 'Aloha', resulting in two civilian casualties. After this, the military began using the crash site for target practice.

July 5, 1943: Consolidated B-24E (#42-7180) U.S.A.A.F. crashed on Green Mountain. Twelve men died in the crash. The site was not located until March 19, 1944. The bomber had been dispatched to find a missing B-24 that was later found 10 miles inland from Santa Barbara. All personnel were members of the 2nd Air Force, 34th Bomb Group, 7th Bomb Squadron stationed at Salinas Army Air Base, Salinas, California. The remains of the crew were returned to their next of kin:

March 23, 1944 [Mountain Democrat]: “Military authorities reported during the week that the body of Lieutenant N. H. Yost, who had been missing since July 5, had been found along with those of his eleven companions in the wreckage of their heavy bomber on the rugged coast of San Miguel Island, off Santa Barbara. Lieutenant Yost is a native of Placerville and is mother, now Mrs. Jack Yost, of 237 Oakmont Avenue, North Sacramento, is the former Marcella Turman, of this city. The lieutenant attended schools in the Sacramento area and enlisted about three years ago with the combat engineers, transferring about a year later to the air forces in which he was commissioned last year. He and his mates were unaccounted for on July 5 when they failed to return from a searching mission. Lieutenant Yost is survived by his wife, his parents, a sister and a brother. The body is to be returned to North Sacramento for funeral services and interment.”