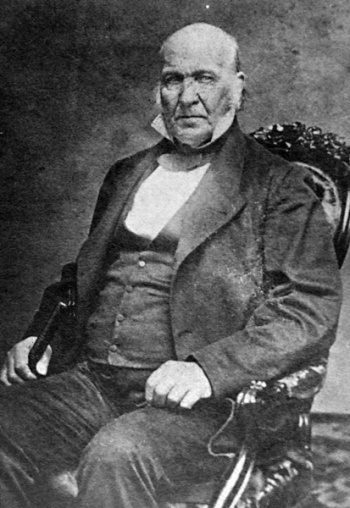 YOUNT, George Calvert (1794-1865), American pioneer, soldier, hunter, trapper, frontiersman, and sea captain from North Carolina. He went to Santa Fe in 1825, and there joined a party of beaver hunters. Part of the time he hunted with Ewing Young and James O. Pattie. He came into California with the party of William Wolfskill in 1831. Captain Dana of Santa Barbara sent for him, and Yount at once embarked upon the enterprise of otter-hunting under Dana.

At a later date, he went to Monterey, where George Nidever (1802-1883) met him. Nidever remembered Yount:

“...I remained in Monterey with a few others of our company. Here I met Yount, who had been in Cal. some time. He was about to return to San Francisco, and invited me to go with him and to make an otter and beaver hunt around the Bay and up the San Joaquin River. I sent my baggage in a Russian brig and I accompanied Yount in his canoe. We hunted a little on the Petaluma side of the Bay and then proceeded to the San Joaquin River, where we trapped with very fair success for about two months. We returned with about 30 beaver, 2 sea otter, and 14 land otter. Sea otter skins were then worth $30 each, land otter $2, and beaver about $4. While on this hunt, we found among the Tulares a little Indian girl that had been abandoned by her parents probably...” (Nidever, 1937, pp. 34-36)

Yount is also said to have discovered an outcropping of gold-bearing quartz on Santa Catalina Island in Cherry Valley in the 1830s, twelve years prior to the 1850 California gold rush. Yount was a friend of island resident, Samuel Prentiss, and he returned to Catalina several times, through 1854.

“The existence of these metals on the Island of Santa Catalina was known long before the acquisition of California by the United States. George Yount, a pioneer of 1830, who, with Pryor, Wolfskill, Laughlin and Prentiss, built a schooner at San Pedro for the purpose of hunting sea otter, found on one of his trips to the island some rich outcroppings. It does not appear, however, that he set much value upon his discovery at the time. He was hunting sea otter, not gold mines. After the discovery of gold at Coloma, and the wild rush of gold hunters to the coast, Yount recalled to mind his find on Santa Catalina. He made three trips to the island in search of his lost lode, but without success. His last trip was in 1854.” (Williamson, Mrs. M. Burton History of Santa Catalina Island, 1903)

Yount and his wife, Eliza Cambridge Wilds had three children:

Yount died on October 5, 1865 at his Rancho Caymus, and is buried in his namesake cemetery in is namesake Napa Valley town. He had a notable history in California.

Gold on Clemente — [Yount Manuscript, Bancroft Library]: “Gold on Clemente. On the east side of the Island of Clemente, at very low tide, in the year 1933, a little more than half way down the Island, was found a ledge of rocks projecting out into the sea, which was full of Gold—Doubtless the Island has since much washed away & the ledge must be quite under water except in extremely low tides; & it may be now quite submerged at all times—but still it is believed that it reaches back into the b which is rather abrupt—It is worth looking after* ...”

Yount's story of gold on the islands caused a stampede to Catalina in the early sixties. Yount himself is said to have gone out three times before 1855 to look for the "lost mine," which he never succeeded in finding.— J. M. Guinn, Ann. Publ. Southern Calif. Hist. Soc., vol. 9, 1912-13, pp. 43-48. (Also printed in Overland Monthly.)

“Mrs. Watson [pp. 8-9] informs us that: ...from the island they visited [on Yount's first sea-otter trip] he returned after a few weeks with seventy-five skins that brought him the snug sum of two thousand dollars. After such success he visited other [channel] islands... [including] San Clemente... Mines of precious metal are supposed to exist here. On the island of Santa Barbara he took ten elephant seals and otter in great abundance. On the island of St. Clemente he built a boat of sea-elephant skins. It was constructed after the fashion of those used by trappers on the western rivers [perhaps the only instance of a 'bull-boat" being used to navigate the open sea]. The skins were cleaned of hair and fur, scraped down very thin upon the flesh side and while moist rolled into the smallest possible compass. When wanted for use they were soaked in water, while timbers from the flexible willow were being prepared. The hides are then skillfully stretched over the timbers and the boat is ready for use. In such hastily made crafts the largest rivers could be crossed. They would carry many tons [pounds] and five or six men in each boat. They were easily transported on the backs of men or animals, and when not needed they were carefully soaked and rolled as before... [In the ocean the sea elephant skin boats] were short lived, as salt water was fatal to them.”