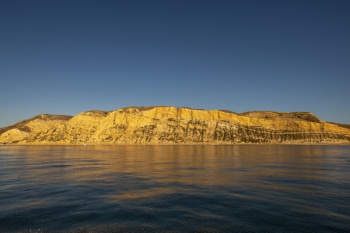 Charles Erickson was a Swedish lobster fisherman who lived at various island camps through the years. The Santa Cruz Island Company officially rented space to him at Yellow Banks at one time. In 1918, Erickson failed to pay his rent and began causing trouble. In court testimony, Erickson said he had occupied Yellow Banks for five years (1913-1917).

When the island was partitioned in 1925, this location was included in Tract No. 7 appointed to Edmund A. Rossi.

Vessels lost at Yellow Banks include:

March 6, 1918 [SCICo]: “On Saturday we went to Yellow Banks and tore down Erickson’s shack. Erickson was not there, and his personal belongings we piled on the beach, not knowing at that time what other disposition to make of them. Aside from his crawfish traps which were piled on the beach, he had left practically nothing of value in the house, having probably taken his bedding and cooking utensils to Santa Barbara. There were five witnesses to his possessions, so we do not see how he can possibly have a come-back.”

March 27, 1918 [SBMP]: “With the destruction of Charles Erickson’s fishing cabin on Santa Cruz Island and his forcible ejection from his island home, and dismissal of the Santa Cruz Island Company’s ejection suit, against Erickson in the superior court here Monday, is closed the first chapter in a controversy over Erickson’s right to maintain a home on the island. The second chapter will bring, according to attorney Francis Price, when he files a countersuit for Erickson against the Santa Cruz Island Company, which is controlled by the Caire family of San Francisco, claiming full damages for the loss of Erickson’s home and fishing gear, a vindication of his rights on the island, and attorney Price said yesterday he may also attack the company’s title to the island. Because members of the fishing colony on Santa Cruz Island have been suspected of killing sheep and cattle and carrying out other depredations on the island, the owning company started an ejection suit against Erickson in the local superior court several weeks ago, this case being looked upon as a test action which would also determine the rights of the entire fishing colony to continue their homes there. Erickson retained attorney Price to represent him and fought the action, claiming that his cabin, which was built on stilts over waters of a creek mouth at Yellow Banks, was located on government tidelands not subject to the island company control. This action was to have come to trial this week, but attorney Price consented to a dismissal of the suit when he learned that Erickson’s house had been torn down and his property thrown away, it is alleged, by agents of the island company while Erickson was away for supplies. Price states that with Erickson thus illegally ejected, there was no use of trying the legal ejection suit, hence the dismissal. Now, according to attorney Price, he will bring suit against the island company for damages sustained by Erickson in the loss of his house for ruling regarding Erickson’s rights on what he claims is tide lands, and also attack the company’s title to the island.”

September 11, 1911 [LAT]: “Dr. G. E. Long and party returned yesterday morning from a ten-days’ trip to Santa Cruz Island on his yacht, the Genieve… Long had originally intended to make Prisoners’ Cove his first anchorage on Santa Cruz, but found that he would not be able to make it without reefing down, on account of the fresh breeze which was blowing, so he gave it up and put back into Yellow Banks, which lies next to Smugglers Cove…”

September 6, 1917 [SCICo]: “We served notice on Charles Erickson at Yellowbanks to vacate. Notice dated September 5th. We told Mr. Carrigan that he wouldn't leave, and that he would kill the first man that attempted to move him. From what we have seen of him, we believe that he would make his threat good. All the cattle killed this year at Smugglers and the Aguaje have been killed during the stay of this man. If Erickson hasn't personally killed these cattle, he must know who has. He has been living with a Mexican woman who we understand is not his wife. A deposition could be obtained from her if the District Attorney will cooperate, and could be used in obtaining an injunction.”

October 9, 1917 [Superior Court Santa Barbara County Case #10481, Santa Cruz Island Company v. Charles Erickson]: “...the defendant unlawfully entered upon... and particularly took possession of that part known as Yellow Banks... stating that he will kill any one who tries to dispossess him...” Erickson denied the allegations, and stated he “for more than five years prior to the commencement of this action was and still is in the actual and undisturbed possession and occupation of... a portion of the beach below a steep bank known as Yellow Banks.”

February 26, 1918 [SCICo]: “We understand that Erickson has left the island. We do not know what the proposed settlement is, but if it includes back rent, would suggest that you accept, as it looks to us if he has left the island we no longer have a case. The crawfish season ends the 26th inst.”

March 6, 1918 [SCICo]: “On Saturday we went to Yellow Banks and tore down Erickson’s shack. Erickson was not there, and his personal belongings we piled on the beach, not knowing at that time what other disposition to make of them. Aside from his crawfish traps which were piled on the beach, he had left practically nothing of value in the house, having probably taken his bedding and cooking utensils to Santa Barbara. There were five witnesses to his possessions, so we do not see how he can possibly have a come-back.”

November 14, 1925 [SBMP]: “The Santa Cruz Island Company owned by the Caire estate, yesterday brought suit in the superior court to eject seven individuals from the island who are alleged to have established fishing camps at Yellow Banks, Blue Banks, and the Willows, without permission of the owners. The company claims to have been damaged to the extent of $1500 by the maintenance of fishing camps by the seven persons who are named in the complaint as Charles Erickson, ...”

According to Pier Gherini [1966]: “For routine supplies we depended upon the Larco fish boats which came to pick up lobsters and supply lobster camps. In consideration of receiving transportation, we granted the company the right to maintain fish camps at Potato Bay, Scorpion, San Pedro Point, and at Yellow Banks.”