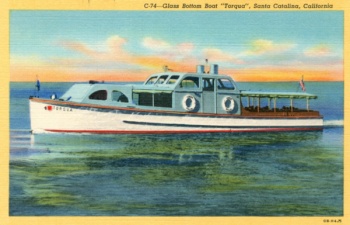 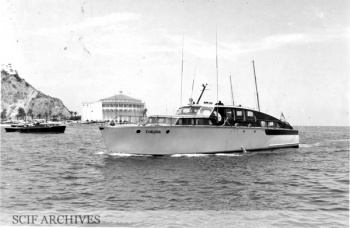 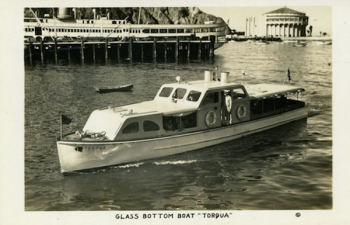 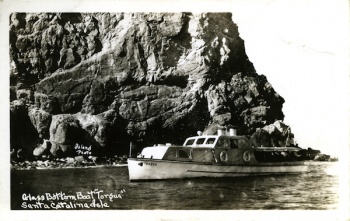 Torqua (#236102)(1937-1942+), 56-foot gas-powered passenger vessel built in Los Angeles for the Wilmington Transportation Company. She was built at the Fellows and Stewart Boatyard on Terminal Island; a twin-screw cruiser with two cockpits separated by an engine compartment containing two Hall Scott gasoline engines. She arrived in Avalon in May 1937 with Eddie Harrison as her captain. In 1942 Torqua was sold to the U.S. Navy.

May 20 1937 [TI/Avalon]: “The Torqua, Santa Catalina's swanky new streamlined glass-bottom boat, was officially launched Saturday, during Harbor Day festivities, from the Fellows & Stewart Boat Works, arriving in Avalon Bay on her maiden cruise during the afternoon. Marilyn Leisk, the charming little daughter of Captain Harry Leisk, broke a bottle of champagne over the bow of the Torqua as the trim craft slid down the ways. Flag-bedecked, with Harbor Commissioner and Mrs. E. J. Amar aboard as honor guests, the Torqua made a cruise of Los Angeles Harbor before starting on her maiden voyage across the channel to Avalon. In its efficiency, its trim lines and modern construction, the Torqua is as far a cry from the first glass-bottom boat launched in Avalon Bay some forty years ago as the China Clipper is compared with the little hydro-plane in which Glenn Martin first flew to the island. The new design of the Torqua was suggested by Captains Harry Leisk and Claude Walton, who supervised the building of the craft. Instead of following the familiar side-paddle construction, the Torqua is designed similar to an ultra modern fast cabin cruiser. Its length is 58 feet; beam, 11 feet, 6 inches; its draft 3 ft. 6 in.; gross tonnage 16; and horse-power, 550. The Torqua is powered by twin screw Hall Scott motors capable of doing 19 knots an hour. Built on twin keels, with the wells for the glass sea windows between, the Torqua is propelled by twin screws instead of side-wheel paddles. The craft is equipped with 240-cubic feet of cork and is unsinkable. The passenger capacity of the Torqua is 85, with space for 50 around the glass wells fore and aft. Equipped with a powerful search light, and able to attain a speed of 19 knots an hour, the Torqua will be operated for viewing the submarine gardens, the flying-fish trip, augmenting the Blanche W, and for fast cruises between points of the island coast.”

August 5, 1937 [TI/Avalon]: “The fishing boat New S. [--] No. 28a 667, that recently struck rocks off Long Point, was towed to Avalon last Friday. On June [--], Eddie Harrison, a diver on the glass bottom boat, Torqua, saw the boat in 40 feet of water. The craft was salvaged and an attempt made to ascertain its owner. So far, the owner of the boat has not been located nor have the members of the crew of the ill-fated boat. Mr. Harrison states that he knows the fishing boat is one of the boats used by the Monterey and San Francisco fishermen.”

May 19, 1938 [[TI/Avalon]: “The picnic party will leave the Pleasure Pier at Avalon at 10 A.M., on May 26, and will be taken to the Isthmus on the motor boat Torqua. The fare will be $1, and any person who desires to do so is invited. Each one should take some sandwiches for lunch, and a dish of cooked food for the luncheon table.”