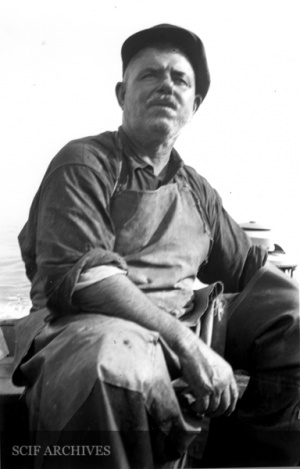 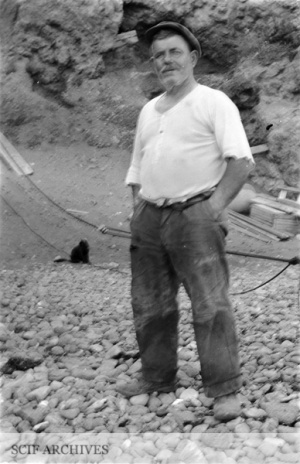 Raymond "Frenchy" LeDreau (1875-1962), was born in Brittany, France on April 15, 1875. He studied for the priesthood but was never ordained. Disenchanted with the church, he chose to travel on merchant vessels to China and America. Sometime around 1889 he signed up for a tour with the U.S. Navy. He served in the Spanish-American War and for a short time thereafter.

Frenchy married his wife, Emma, in San Pedro, and they had three children, two daughters and a son. Emma died in the flu epedemic of 1918, and Frenchy sought solace and wine. After a few years lobster-fishing in Mexican waters, he moved to West Anacapa Island sometime around 1928.

Frenchy was well-known from Monterey to Ensenada as the resident Anacapa fisherman who lived a hermit-like existence. From about 1934-1938 during a period when Charles Johnson lived on Anacapa Island, Frenchy was forced to move to neighboring Santa Cruz Island where he was moved from camp to camp by the Larco fish-brokers. Frenchy ended up living on Gull Island until one day in 1938 he was notified by a passing fisherman that Charles Johnson had died on Anacapa. Frenchy took the opportunity to immediately inhabit Anacapa once again.

After Anacapa Island became a National Monument in 1938, Frenchy acted as unofficial Park Service representative, reporting acts of vandalism and island activities. At the start of WWII, the Navy tried to remove Frenchy from Anacapa for the duration of the war. They tried. They took him ashore, and he always returned. The Navy finally decided he could stay as watchman of the island, and reportedly there was always an ample supply of lobsters for the Naval officers mess. Indeed, Frenchy became recipient of "surplus" canned food.

After the war, friends helped Frenchy apply for a State old age pension. Described as a “hermit who enjoyed company,” Frenchy lived alone with his dozen cats in one of several cabins which had been built in 1925 at the cove which now bears his name. From a tiny window in his cabin, Frenchy had a million dollar view across the channel from which he could see steamers and potential visitors passing by. A narrow trail led from his shack to the beach where he kept his lobster traps, fishing gear, skiff and a mooring device to pull his skiff above high water. He often traded lobster for necessary supplies and liquor. Although water was always a problem, he begged it from vessels that anchored off his beach.

State authorities, concerned about his advanced age, failing sight and failing health, told him he had to leave the island, and in 1954 in his 80th year, he regretfully agreed after suffering injuries in a fall. Frenchy died at home at 520 Garden Street, Santa Barbara, on April 21, 1962. He was 87 years old.

1942: “Mr. Raymond LaDreau, who has lived on the island since 1930, says that the pelicans have nested on West Anacapa every year since then, but not on East or Middle Anacapa. He was told by earlier residents that the pelicans left the east end when the lighthouse was established there.” » Bond, Richard M. Banding Records of California Brown Pelicans in Condor 44:3 (116-121) May-June 1942

April 25, 1962 [SBNP]: “Raymond LeDreau, 87, of 520 Garden Street, who was born in France and lived in Santa Barbara county for 47 years, died Saturday in his home. Requiem Mass will be celebrated tomorrow at 9 A.M. in Our Lady of Guadalupe Church. Internment will follow in Calvary Cemetery. Mr. LeDreau had no known relatives.”

Frenchy’s Cove, Anacapa Island is located in the north side of West Anacapa. It is named for Raymond "Frenchy" LeDreau, long-time resident fisherman on West Anacapa Island who built several cabins at the site where he lived for almost three decades. In February, 1901 the Dawn was wrecked in this vicinity. In October, 1952 the Del Rio drifted on the beach after she burned.