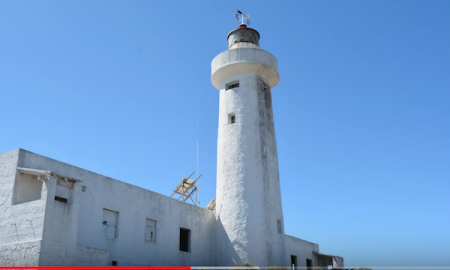 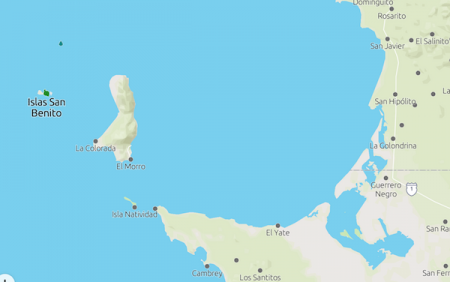 ISLA NATIVIDAD is about 4 miles long and a mile and a half wide at its widest point. It lies a little over 3.5 miles to the west off Punta Eugenio on the Baja peninsula, and is a little over 9 miles south of Cedros Island. There is a lighthouse at the northern end of the island, and there is also a dirt airstrip on the island. Abalone, lobster and other fishermen live on the island. Isla Natividad is a barren and hilly island with a peak 150 meters high rising near the center and steep rocky shores fringed by kelp. Famous for its abundance of wild cactus gardens and spiny scrub, it is home to 79 plant taxa—8 of which are cacti.

The 1905-1906 California Academy of Sciences expedition to the Galapagos aboard the schooner Academy, stopped at Isla Natividad on July 19, 1905. Expedition participants included:

November 26, 1852 [SDU]: “The Cortez—The steamer Cortez left Panama on the 7th, arrived at Acapulco on the 13th, left on the 14th, and met the Golden Gate on the 19th off Natividad Island. Had a very rough passage from Acapulco. Died on the passage: H. Brewster, Michigan; J. M'Cadden, Pittsburgh; Frederick Feshes, New York.”

July 29, 1859 [SDU]: “The Sonora was detained at Acapulco nineteen hours, awaiting the arrival of the New Orleans Tehuantepec mails; left Acapulco on the 21st at 10 A.M.; on the 24th, at 2 P.M., passed the Uncle Sam, bound down; at 3 P.M., on the 25th, passed steamer Orizaba off Natividad Island, and parted company, she taking the inside passage of Corres [Cedros] Island; since which time have experienced strong head winds and seas. The Sonora brings 586 passengers, all well, having had no sickness on board during the passage. She also brings 292 bags of United States mail.”

November 11, 1897 [San Diego Union]: “The junk Hong Kong and sloop Impossible have sailed to the south coast for guano. The sloops Dot and Helena have arrived with cargoes of the same stuff. The schooner Freia is being overhauled for another trip down the coast. She will call at Cedros Island on the way back to get Jack Dampier, the hero of Natividad, and his two pals, who have been gathering abalone.”

January 31, 1903 [Sausalito News]: “Left Starving on a Southern Island. Seven Mexicans Tell of Hardships Endured on Natividad. San Diego.—The steamer St. Denis arrived in port from the lower coast with passengers and freight. The steamer has been as far south as Santo Domingo. She made a stop at Santa Catarina and took on $3000 worth of onyx. While the St. Denis was at Cedros Island seven Mexicans arrived at the mining camp and told a story of suffering on Natividad Island, where they had run short of both food and water. The men were nearly starved. They said they had been at work on the island for Harry Robbins of this city sacking guano, having been left there by the schooner Gerald C. They expected the schooner to return and waited for her arrival, but the vessel did not put in an appearance, and the men feared that they would die from hunger and thirst. The water gave out and the men had to eat the mescal plant, which made them sick. They were without food and water for five days, when they concluded to take an old skiff and row to Cedros Island, thirty miles distant. They finally made the south end of Cedros Island and had to walk several miles up to the camp, where they were given food and nourishment. Two of the men came with the steamer as far as San Quentin and the others remained at Cedros Island.”

December 23, 1914 [SBMP]: “Motor Ship with $1,250,000 Cargo on Ledge Thirty Miles From Where isthmian Grounded. San Diego.—Dec. 22.—The Danish motor ship Malakka with a $1,250,000 cargo late tonight was still fast on the rock ledge at the northwestern end of Bird Rock off Natividad Island. The Malakka has been left to her fate, for a few days at least, as the steamer Arizonan, which stood by to lend aid all last night and part of today, has proceeded down the coast. The captain of the Malakka has asked that a salvage steamer and an underwriting expert be sent to his aid at once. The only salvage steamer available is the Iaqua, now at Ventura endeavoring to lift the steam schooner Coos Bay. The Malakka grounded Friday night. The first mate, who left the motor ship in one of her long boats with a party of sailors, to row to the nearest telegraph station at San Quentin, 130 miles distant, has not been heard from since he left Bird Rock Saturday morning, and it is probably the entire party was lost, as an unusually heavy sea has been running the last few days between Natividad and the mainland, according to the masters of vessels arriving from the south. Shipping men are calling attention to the remarkable coincident of two large ocean freighters being swept practically 50 miles off their course and striking a ledge within 30 miles of each other. The Isthmian grounded on San Benito Island Friday morning, and the Malakka but a few hours later, both during a terrific sea and a violent gale.”

February 14, 1919 [San Pedro News Pilot]: “Schooner Puts Out with Motley Crew. San Diego, Feb. 14.—The power schooner Newark sailed from here today for Lower California ports with one of the motliest crews that ever manned a ship. In the lot are two acrobats, two barbers, one automobile salesman, a drug clerk and a street sweeper from San Pedro and San Diego. The schooner will go to Natividad Island for guano. The skipper hopes for a successful voyage with his crew.”

December 27, 1920 [San Bernardino Sun]: “Storm Keeps Two Vessels From Christmas in Port. San Diego, Dec. 26.—Stormy weather on the Lower California coast prevented at least two vessels from making this port in time for Christmas. They are the motorship Gryme and the power schooner Jennie Griffin. The latter was reported yesterday at Ensenada en route here from Natividad Island. The Gryme, from Ascuncion Island, has not been reported here in two weeks. Both vessels are carrying guano cargoes.”