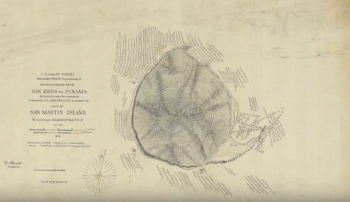 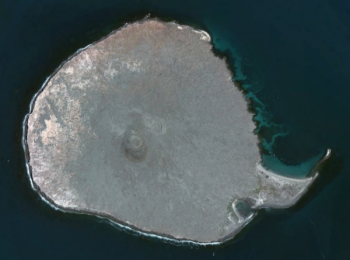 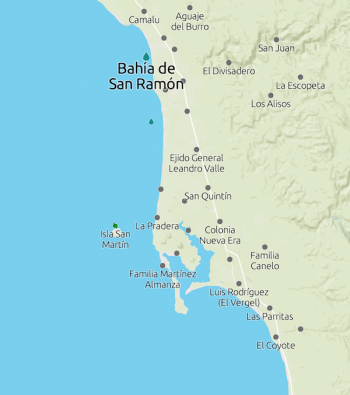 ISLA SAN MARTIN, Baja California, Mexico is a small rocky island about a mile in diameter and rounded-triangular in form. It is located a few miles offshore to the northwest of San Quintin Bay. On the northeast side the shore is low with a small sandy beach and a small rounded tidal lagoon used by Harbor Seals. The rest of the shore is rugged and precipitous, rising from a few feet to over 150 feet above the sea, the highest cliffs facing south. The entire surface is covered by ragged and broken lava beds, full of pits, caves, jagged points and sharp ridges. The middle of the island is two volcanic peaks, the higher of which is about 470 feet. One of the peaks contains an old crater.

Isla San Martin was named in 1775 by Juan Francisco de la Bodega y Quadra (1743-1794), a Spanish naval officer. Located just 5 km off the Baja California Pacific coastline west of San Quintin, the island falls under the municipality of Ensenada. The island has no fresh water. It is uninhabited, save for temporary fish camps. Historically it was known as one of the guano islands. Colonies of Cormorants and Pelicans breed here.

This small extinct volcano, which rises 410 feet above sea level, is home to a diverse ecosystem. Hassler's Cove is a refuge for overnight shelter from Pacific storms and swells. It is also home to a harbor seal colony and six species of reptiles. The endemic Isla San Martin wood rat was brought to extinction by feral cats in the 1950s.

The island has a private fishing concession from the Mexican government and access to the island is by permission only.

The 1905-1906 California Academy of Sciences expedition to the Galapagos aboard the schooner Academy, stopped at Isla San Martin on July 11, 1905. Expedition participants included:

October 1846: “On the 14th we were close to the double-peaked island of San Martin, a most barren and desolate spot, apparently an extinct volcano. The rocks were swarming with seals; we had never seen them in greater abundance; and their howling, shrieking, and barking rendered them most unpleasant neighbors. The position of the island is in lat. 30 degrees 28' 0" north, and long. 115 degrees 57' 0" west; the right peak is 567 feet high...” [Seemann, Berthold. Narrative of the Voyage of the H.M.S. Herald during the Years 1845-51 Under the Command of Captain Henry Kellett London: Reeve and Co. (1853) Vol. 1.]

October 2, 1871 [DAC]: “Lower California. Wreck of the Talavera. San Diego, October 1st.—The wreckers who left here last week for San Ramon Bay, Lower California, where the English ship Talavera was beached, found the ship deserted, and took possession of her, the crew and officers left in charge of her having gone ashore in search of provisions. The wreckers report finding ten feet of water in her hold, but expect to get out all the coal between decks.”

October 4, 1871 [DAC]: “Auction Sales. This day. Wednesday, October 4, 1871. at 1 o'clock, P.M., In the Rotunda of the Merchants' Exchange, California Street, we will sell the British Iron Ship Talavera, and cargo of coal at Auction. The British Iron Ship Talavera built in five water-tight compartments; 1161 tons register, classed A No. 1, at Liverpool Lloyds; with 1450 Tons of Coal on board. Together with 2 Bower, 1 Sheet and 1 Stream Anchor, 1 Kedge, 2 Bower Cables, 150 fathoms each, Stream Chain, 90 fathoms, 3 Tow Lines, 5, 9 and 11 inch each; large quantity of New Rigging, Coils of New Rope, 2 Suits of Sails, Water Tanks, 3 Iron Lower Masts, with Iron Lower Topsail Yards and Bowsprit, Wire Rigging, 4 Pumps, 2 Boats, Windlass, Bolts of New Canvas, Spare Spars, Stand of Arms, etc., etc. Sold for account of whom it may concern, by order of Underwriters. AS SHE NOW LIES, Inside of San Martin's Island, in San Ramon Bay, About 100 miles south of San Diego, laying stern on to the shore; with two anchors down. Terms Cash in U.S. Gold Coins. Thos. J. Poulterer & Co., Auctioneers.”

October 28, 1871 [SDU]: “Arrived, steamer Diana from the wreck of the British ship Talavera in San Ramon Bay, Lower California. Captain Plummer of the Diana reports he found the Talavera lying stern on beach, with three feet of water over the coal, which composed her cargo, at high tide, with heavy surf rolling in upon her; no chance of saving cargo. The wreckers had stripped her of her rigging, and sent it to St. Martin Island. The California Wrecking Company, which bought the wreck, is likely to lose all it invested in her.”

August 20, 1895 [SFCall]: “War on Guano Smugglers. How an American Schooner Eluded Mexican Authorities. San Diego, Cal., Aug. 19.— The steamer Pacheco returned from Ensenada this morning after an unsuccessful cruise for guano-smugglers around San Martin Island along the coast of Lower California. The vessel was turned over to Mexican officers, who believed they could capture the junk Peking of this port, which was expected at San Martin Island to ship over 400 sacks of guano gathered there. But the weather was foggy and the steamer had to blow its whistle every moment or two, which gave warning to any vessel that may have been in the neighborhood. The officers secured the guano on the island and took it to Ensenada.”

November 9, 1895 [SFCall]: “Two Young Smugglers of Guano Sentenced at Ensenada. Long Terms in Prison. Their case will be appealed to the Supreme Court of Mexico. Vessel owners alarmed. The convictions have put a dampener upon the illicit industry. San Diego, Cal., Nov. 8,— William O. Forrest and Wilbur Daynes, young Americans, who had gone to San Martin Island and other places along the Lower California coast on a guano-gathering expedition, and who were captured several months ago on San Martin Island by Mexican officials, who pursued them on the steamer Carlos Pacheco, were sentenced at Ensenada today to fifteen months' imprisonment and to pay a fine of $133 or serve thirty days more in prison. A notice of appeal was made, and the case will be carried to the Supreme Court of Mexico.”

November 8, 1896 [SFCall]: “Gives chase to poaching craft. Steamer Pacheco leaves San Diego in quest of trespassers. Sent to capture vessels at Guano Islands off the Mexican coast. Seeks for eight offenders. Concessionaires attempt to enforce the payment of large royalties. San Diego, Cal., Nov. 7. — The steamer Pacheco, which sailed from here Wednesday night, ostensibly on its regular trip to San Quintin and way ports in Lower California, is now said to be on a chase after eight guano-poaching schooners which are believed to be gathered in Vizcaino Bay. These craft are the junk Acme, Captain Chase, and the Pekin, Captain Moodlin; the schooners Ellen, Captain Jinsen; Whalberg. Captain Martin; Hongkong, Captain Hornstein; Alta, Captain Farwell; Sailor Boy, Captain Edwardson, and Ida, Captain Atwood. Most of these schooners sailed from this port the latter part of October and are now probably at the Guano Islands. These islands are about 350 miles south of San Diego. All of them were formerly covered with guano and have kept a fleet of small craft busy carrying the fertilizer to this port. The deposits are owned by the Mexican Land and Colonization Company, which has a concession from the Government for all the fisheries and deposits on the peninsula coast. The company claims a royalty of $2.50 per ton and the Ensenada customs officials impose port charges of about $70 on each schooner. The skippers say this is too much to make the business profitable, and therefore they run down and get the guano and bring it to San Diego without stopping to visit the Ensenada officials or to render an account to the company. When O. J. Creweread assumed the management of the company a few weeks ago he served notice on the guano-poachers that they would be prosecuted for further encroachments on the company's preserves. The present trip of the Pacheco is for the purpose of apprehending the schooners. Last year the Pacheco made a similar trip and overtook the schooner Pekin at San Martin Island. Two boys were on the island gathering guano and another on the schooner. The schooner got away but the steamer captured the boys on the island, together with 900 sacks of guano. The boys are now serving sentence of eighteen months in the Ensenada jail.”

May 3, 1912 [LAH]: “Weird tales about trees and fish. Topsy-turvy vegetation in Southern Islands and strange colored crabs. Sky lines hidden by game. San Martin and other points of interest invaded by touring party. A strong stimulant to the man affected by the wanderlust is the story told by Sergeant George Willetts upon his return from a cruise along the islands off the west coast of Mexico. Wild game so thick that the sun was obscured, strange creatures of the sea and strange rock formations which showed the hand of nature to be far more weird than the most imaginative creations of man were seen everywhere. In some of his tramps over the islands, he passed a few moments from zones thickly vegetated to very arid ones without a vestige of life of any kind. Sergeant Willetts and his party wore out shoes in a seven hour tramp to visit the crater of the volcano on San Martin Island. They found traces of ashes in the crater, although this is supposed to be an extinct volcano. The water in the little harbor were the boat swung at anchor was very clear and fish could be seen swimming in the depths. After catching a mess a feast was proposed, but the first mouthful made them sick. The fish were as bitter as quinine. Near the shore large numbers of brilliant red and orange colored crabs were captured and are now on their way to the Smithsonian for classification...”